Free Shipping On Orders Over $85

Feature in The Cove Magazine May 2021

Feature in The Cove Magazine May 2021

It sure gives you a background into my little business. Humble beginnings, and slowly growing. Thanks to everyone for their support. Many Thanks Liesl  – The Chilli Chick 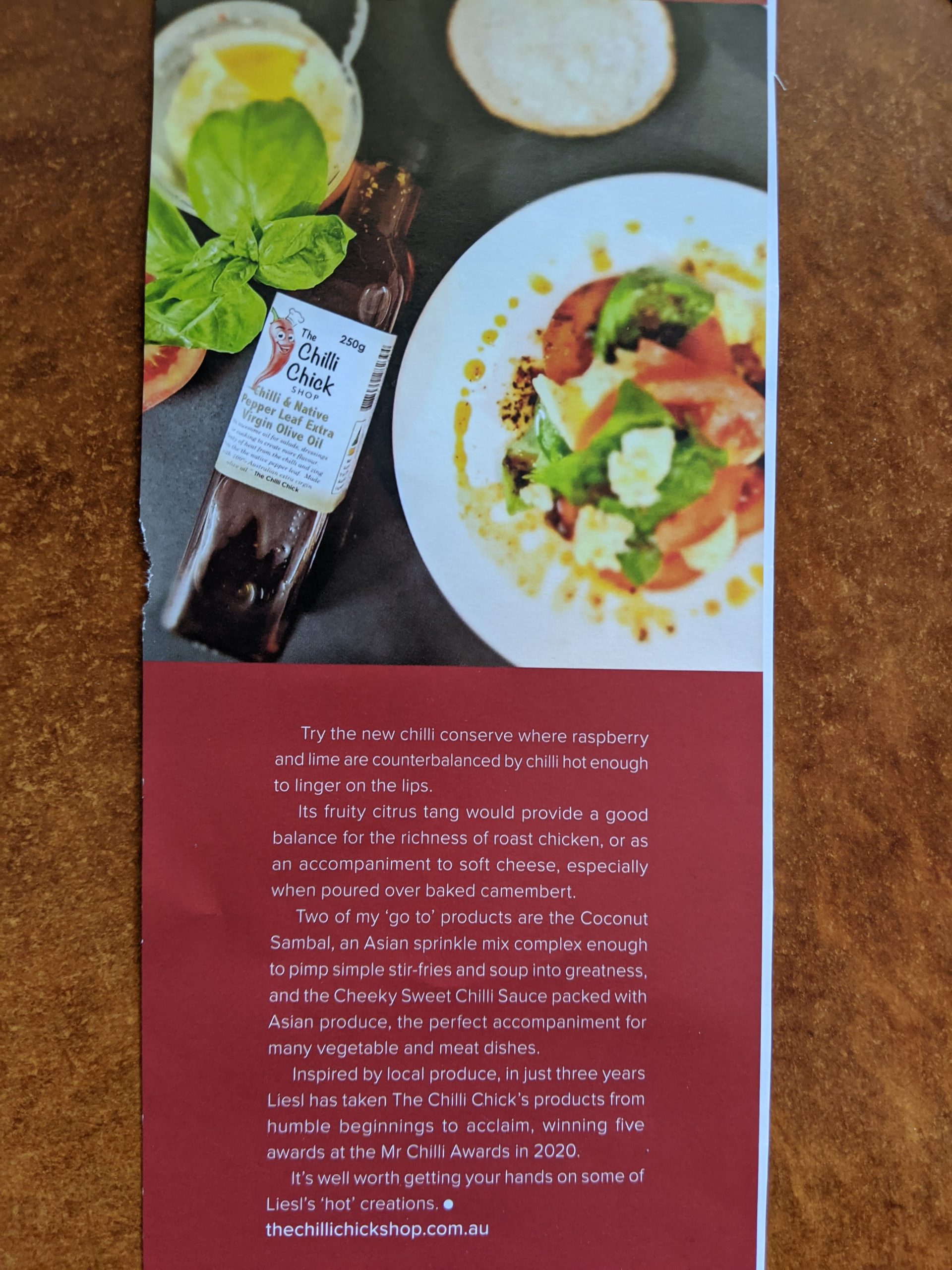 CUISINE
BRING THE HEAT
The founder of The Chilli Chick Shop, Liesl Addicoat, brings passion and flavour to all her products.

As word of the bold flavours and textures of

“It was time to try something for me, to take the plunge to follow my passion full-time,” Liesl tells us, describing the launch of her business at the Chinderah Chilli Festival in March 2018 as the first time her range went on show to a wider audience.
Living in a country with a fledgling chilli industry, Australians may not be fully aware of chilli’s widespread use in world cuisines.
Almost 16 per cent of the world’s food production is chilli-related, with over 400 different chilli varieties grown worldwide.
Inspired by the Tweed’s local produce, The Chilli Chick’s products are all handcrafted, small batch chilli spiced sauces, relishes, pickles, oil, dukkah, chilli fudge and popcorn made from fresh Australian produce.

As her production level has risen, Liesl not only sources her chillies ‘hyperlocally’ from her own garden but also from the surrounding Tweed area and further afield in Queensland when necessary.
“We use six or seven different types of chillies in our products.” Liesl tells us.
WHEN WE SAY that Liesl Addicoat’s food is ‘hot’,

it’s a compliment of the highest order. A chef by trade, Liesl shares her passion for flavor some food through the products she
makes in her kitchen for The Chilli Chick Shop. Liesl’s journey into business took a circuitous route.
After serving her chef apprenticeship at the Royal Pines Resort, Liesl gained experience in Australian kitchens before spreading her wings to work in the Canadian Rockies for several years.
On her return home, Liesl moved into food industry training and product development in a
corporate environment. Little did she know that a geographical move
was about to change the direction of her career. “We moved to the Tweed region in 2016 and were pleasantly surprised at the amazing
produce in the area,” Liesl says.
Her husband, a keen gardener, expanded their home garden, growing vegetables including
different varieties of chillies. Their produce inspired Liesl’s creativity as
she began making chilli sauces and relishes for friends, using her sauces as a base for recipe development.
52 covemagazine.com.au – Issue 84
While there are traditional hot sauces in the range, such as ‘Some Like It Hot’ that contains five different types of chilli, Liesl’s business is different to others in the way she combines chilli with other vegetables, such as sweet potatoes, beetroot, pear and traditional tomato.
The result is sauces that are full of flavour and texture, achieved without preservatives or fillers.
Embellished by Asian ingredients including miso and tamarind or native Australian plants such as pepperleaf, The Chilli Chick products are completely different from anything else on the market and are suitable for gluten-free and vegan diners.
“It’s not just about heat, it’s always about flavour first,” Liesl says, adding that she makes products to suit all palates from mild to feisty and sweet to savoury.
A great example of Liesl’s flavour principle is her best-selling Beetroot Chilli Relish, the soothing coolness of beetroot broken by a medium heat chilli as it lingers on the palate. It makes a perfect topping for a ham sandwich, so different to the Treacle Chilli Onion Relish whose jammy bite is a great complement to barbecued beef sausages.

Try the new chilli conserve where raspberry and lime are counterbalanced by chilli hot enough to linger on the lips.
It’s fruity citrus tang would provide a good balance for the richness of roast chicken, or as an accompaniment to soft cheese, especially when poured over baked camembert.
Two of my ‘go to’ products are the Coconut Sambal, an Asian sprinkle mix complex enough to pimp simple stir-fries and soup into greatness, and the Cheeky Sweet Chilli Sauce packed with Asian produce, the perfect accompaniment for many vegetable and meat dishes.
Inspired by local produce, in just three years Liesl has taken The Chilli Chick’s products from humble beginnings to acclaim, winning five awards at the Mr Chilli Awards in 2020.
It’s well worth getting your hands on some of Liesl’s ‘hot’ creations.
thechillichickshop.com.au

Proudly Australian made and owned. Product manufactured in N.S.W. Australia

Find a Stockist
Near You

Join The Chilli Chick Shop Family
Never miss out on any specials, recipes, events and product launches!
Plus Get 10% off your first order!

Join The Chilli Chick Shop Family and Get 10% off your first order!

Never miss out on any specials, recipes, events & product launches!